Pollok FC can confirm that Pat O’Donnell has joined St. Roch’s on loan a month’s loan, meaning the young central defender will revert to Lok colours in mid October. We wish him well up at James McGrory Park.

Elsewhere, Lok have drafted in 20-year-old Pollok Juveniles keeper Tam McGuire as goalkeeping cover on a delayed transfer basis. He will remain on Lok’s books until the end of the season. He has already been involved with Lok at first team level, featuring in the squad versus Arthurlie in pre-season. 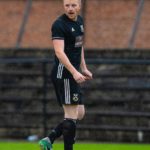 The Lok website can confirm that Pat O’Donnell has now signed for the club and is available for selection for the Lanark United cup tie this week. The 22 year old central defender has spent the past couple of seasons with the Lok u21 side and prior to that was with various youth clubs including St. Cadoc’s YC, Giffnock SC and St. Peters Juveniles Giffnock North. Welcome aboard!

In other news, Lok have recalled Mikey McWilliams from his loan to Petershill and he too is available for selection this week. 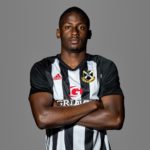 Pollok can confirm that Mohamed ‘Sena’ Niang has now left Pollok and has signed for Scottish Championship side, Partick Thistle.

Sena graduated from the Pollok United Soccer Academy in the summer of 2017 after having captained the U19’s the previous season. As the first academy graduate to make the step up, he made his first team debut against Arthurlie in a 1-0 Sectional League Cup win and made his first league start a few games later away to Kirkintilloch Rob Roy in the league. He finished the 2017-18 season with 20 appearances.

Sena has made 9 top team appearances this term and he scored his first goal for the Lok in a 4-1 win against Maryhill. On his move, Sena had the following message for the Pollok faithful;

It’s been a pleasure to play for Pollok. It’s a journey in my life that I am never going to forget as it gave me the platform to go and play the best sport in the world and finally achieve my dream, to be a full time footballer.

I would like to thank the fans as they’ve been great to me since the day I made my debut. I always gave 100% because of how much love I have for the Pollok fans and my teammates.

I would like to wish all my teammates and coaching staff all the best for the remainder of the season. I will miss playing at Newlandsfield, but now that I live closer to the ground I’ll be coming to most home games as a fan to cheer on the lads.

I’d also like to say a massive thanks to the academy from mini kickers all the way to the Under 19s for always been supportive and cheering my name. You guys mean a lot to me. A special mention to the squad and coaches from last years Pollok u19’s, a brilliant bunch of lads who were always there for me when I needed support.

Commenting on the move, manager Tony McInally had this to say; All of us in the dressing room are delighted that Sena has managed to secure his dream move of playing full time professional football after securing a deal with Partick Thistle. We have worked hard every week with Sena on all aspects of his game so it is fantastic that Thistle have seen this improvement and potential in the lad to offer him a great deal.

On a personal level, I’m really pleased that his teammates worked with him and helped Sena every week to provide support and experience to him on and off the pitch to develop into the player he is today.

From the dressing room we would like to wish Sena all the very best in the next step of his football career. I am sure he has a really bright future in the professional game if he continues to listen, learn and improve his overall game.

All the best Sena.

Echoing the manager’s sentiments, on behalf of everyone at Pollok we’d like to wish Sena the very best. 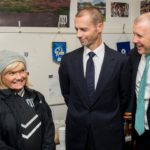 It was with much sadness that we learnt of the passing of Pollok United Soccer Academy coach, Jane Lavery.

Janie was a much loved colleague and coach to everyone involved with the academy and will be greatly missed.

Last year Janie was awarded the Scottish FA grassroots award in recognition for her work with the Academy’s girls and disabled sections. Her contribution was massive and will always be remembered. Our thoughts are with her family and friends at this sad time.

There will be a minutes silence in memory of Janie prior to tomorrow’s home fixture against Auchinleck Talbot. 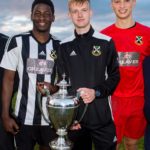 Ahead of the new season, Pollok are delighted to announce the signings of ‘keeper Scott Johnson and defender Tony Coutts on dual contracts for the 2018-19 season. The players, both products of the youth academy, rejoin the first team after being part of the squad in the second half of last season.

Scott Johnson made his debut for Pollok in the January Scottish Cup win away to Rossvale, keeping a clean sheet in the process. He went on to make another 7 appearances for the first team as cover for the injured Jordan Longmuir.

Tony Coutts is yet to make an appearance for the first team but served last season as captain to the league winning Under 19’s side.

The players join academy graduate Mohamed Niang in the squad for the forthcoming season. This Thursday night we are delighted to once again host the Pollok U19’s in their crucial league match against Clydebank.

The final game of the league season sees the young ‘lok three points ahead of their counterparts needing a win or draw to become champions. Kick off is at 7:15 and it’s free to get in.

In their penultimate league game, Pollok U19’s ran out convincing 9-1 winners away at Larkhall Thistle. 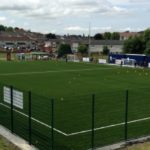 PUSA is a SFA Quality Mark Club (Legacy level) based at Dennis Donnelly Park in Corkerhill.

Training is on Monday and Wednesday. With no games for the first team this week, head down to Newlandsfield this Thursday to see the U19s take on Finnart in the league. We are delighted that this Thursday, the Pollok U19s will play their league match against Albion Rovers at Newlandsfield with a 7pm kick off.

After Sunday’s hard fought 3-1 win against Cumbernauld Utd, the ‘lok maintained their position at the top of the table. With just 7 games left this season, the U19s have a 4 point lead from Clydebank in 2nd with Thursdays opponents Albion Rovers in 3rd.

This season Scott Johnson, Mouhamed Niang, Tony Coutts and Nathan McGarvey have all joined up with the first team squad so it would be great to see a big crowd at Newlandsfield on Thursday to support the boys and see some more possible stars of the future.

Kick off is 7pm and admission is free.

Pollok are delighted to announce that Nathan McGarvey and Tony Coutts have joined the first team squad from Pollok Under 19’s.

They join fellow academy players Mohamed Niang and Scott Johnson who have both made first team appearances this season.

Speaking on the news of the signings, Pollok FC President Iain McFarlane had this to say;

“It’s testimony to the great work of the academy and first team coaches. It’s a significant step for Pollok FC on our journey to establishing a player pathway and will act as a real encouragement to the younger kids at the academy.”

Coutts, a central defender and McGarvey, a midfielder, are integral parts of the 19’s squad and will join up with the first team squad for the remaining league games and West of Scotland and Central cup campaigns.

In the summer of 2017, Under 19’s captain Mohamed ‘Sena’ Niang initially signed on a dual contract and made his Pollok debut in the Sectional Cup win against Arthurlie in August. He has since made nine league appearances and two cup appearances.

‘Keeper Scott Johnson made his Pollok debut earlier this year in the Scottish Cup win against Rossvale, keeping a clean sheet in the process. He also made his league debut in the recent draw with Beith.

In other news, goalkeeper Derick Moore, who had been loaned to Maryhill, has been released by the club.