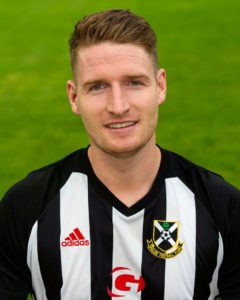 Danny is a tall central defender who joined Pollok in July 2018 from Kirkintilloch Rob Roy. He began his footballing career in the Queen’s Park youth system as a young teenager before moving on and through a succession of youth and amateur clubs. The last of these, Drumchapel United YFC, was who he joined Cumbernauld United from in 2012. He enjoyed three seasons at Guy’s Meadow before moving on to the Rabs but after one season joined the highly successful Auchinleck Talbot. That big move did not work out though and after requesting a transfer in March 2017, he was able rejoin his old team. He remained with them until the summer of 2018 when he signed a one year deal with Lok. In January 2019 it was announced that he had signed up again through to the end of the 2019-20 season. After being transfer-listed a few months into the season, Danny departed for Darvel.