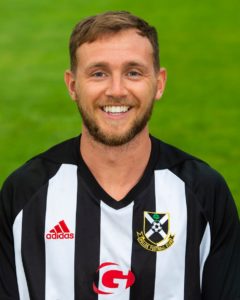 Left back Danny signed for Pollok in the summer of 2018 from Rob Roy where he had spent the previous five seasons. He had began his career with Queen’s Park and then had a few years in the under 21s at Knightswood. In January 2019 it was announced that he had signed up again through to the end of the 2019-20 season. Danny was voted Player of the Year for season 2018-19.