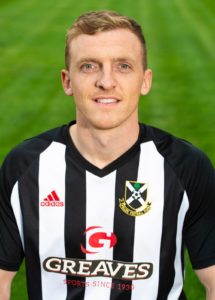 Right-sided defender David began his career at professional level with Partick Thistle in the 2003-04 season, though left at the end of his contract without making a first team breakthrough. That had to wait until he joined his next club, St. Mirren, where he remained for the best part of a decade. While at the Buddies,  and despite a number of injuries, he played 99 top flight matches and was a near ever present in season 2009-10. After leaving the Paisley outfit by mutual consent, he had a year out of football before having his first taste of Junior football with hometown side Greenock Juniors, though at the end of that season, he won a move back into Senior football with Stranraer and made 42 league appearances with them over three injury-blighted seasons. He moved to Hurlford for 18-19 then signed up for Lok on a one year deal in June 2019, extending his stay by a further year in May 2020, tying him at Newlandsfield until the end of the 2020-21 season.