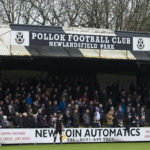 Ahead of Saturday’s match, we would like to remind all Pollok and Clydebank supporters that absolutely NO alcohol is permitted inside Newlandsfield Park under any circumstances.

In the run up to Christmas, the club is asking the Pollok support to bring along a small bag of non perishable food items to one of the next 3 home matches. This year the donations will be handed over to the Glasgow South West foodbank as well as the Lodging House Mission in time for Christmas to help those in our community who find themselves in crisis.

Non perishable food and basic toiletry items are welcome and at the moment they are particularly in need of;

The Pollok support have generously donated to the foodbank over the last few Christmases and most recently at Easter. Bags can be dropped off at the next three home games listed below.

After last weeks flurry of new fixtures for January, the club can confirm that we will finish up the first month of 2018 with a home match against Hurlford United in the league. The Hurlford fixture follows a home match against Arthurlie on January 6th before we hit the road to play Clydebank on the 13th and then Rossvale in the Scottish Junior Cup on the 20th.

We look forward to seeing you at Newlandsfield next year!

The Sectional Cup Final against Clydebank has now been confirmed for Sunday November 5th with a 1:30pm kick off. The game will take place at Somervell Park, Cambuslang.

As a result, Pollok’s league game with Arthurlie on November 4th has now been postponed.

The home league fixture versus Clydebank has now been reinstated following the postponement of the sectional cup final. The game will now go ahead as originally planned at Newlandsfield on Saturday October 7th, with a 2pm kick off.

Preceding that match, the ‘lok face Hurlford United at home this weekend (23rd Sept) before we travel to New Cumnock next Saturday (30th) to face last seasons double winners, Glenafton.

All the forthcoming fixture details can be found here.

The Sectional League Cup Final between Pollok and Clydebank has been postponed.

The match was due to take place at New Tinto Park on Friday 6th October.

As of yet a rescheduled date has not been set. The club will advise of any rescheduled fixtures once confirmed.

The Sectional League Cup Final against Clydebank will take place on Friday 6th October at New Tinto Park, home of our group stage opponents, Benburb. The game will have a 7:30pm kick off.

Our league match originally due to be played 24 hours later, also against Clydebank, will be rescheduled.

road to the final

After an unbeaten run in the group stage, the ‘Lok have since beaten Forth Wanderers and Renfrew to book their place in the final. Clydebank came through their group with three wins and a draw. After defeating Glasgow Perthshire, Maryhill and Ashfield, the Bankies rounded off the group with a draw against Yoker. Their route to the final was completed with wins against Kirkintilloch Rob Roy and Cambuslang Rangers.

After tonights 5-0 victory against Forth in the Sectional League Cup, Pollok will now face Renfrew FC in the semi final of the competition.

The match will take place on Wednesday 6th September with a 7:30pm kick off. The match will be moved to New Western Park in Renfrew so that the match can be played under the floodlights.

The winner of this semi final will go on to face Super Premier newcomers Clydebank who beat Cambuslang Rangers 5-1 in the other semi final.