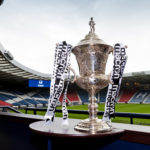 Pollok will travel north to Forres Thistle in the Macron Scottish Junior Cup Second round after the two teams were paired with each other at this afternoons draw at Hampden Park.

The match will take place at Logie Park on Saturday 28th of September.

Due to the Scottish Junior Cup 1st Round draw involving Benburb, Lok’s previously scheduled game on that date against the Bens will now instead be a game at Newlandsfield against Kilbirnie Ladeside.