Would supporters please note that due to circumstances outwith Rossvale’s control, the turnstiles at Petershill Park will NOT be operational on Saturday.

ALL supporters are requested to enter via the main reception and to arrive early as a large crowd is expected. 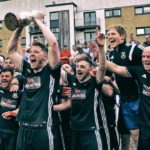 Our Scottish Cup tie away to Rossvale on Sat 20th January has been switched to Petershill Park. The match will still kick off at 1:45pm.

The draw for the Central 1st and 2nd rounds was made last night. Pollok have received a bye in the 1st round and will travel to face the winner of the first round tie between Newmains or Cambuslang in the second round. Dates to be confirmed.

After defeating Royal Albert in round 1, we will face an away tie to either Saltcoats Vics or Arthurlie in the second round of the West of Scotland cup. Dates to be confirmed.