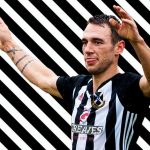 Pollok are delighted to confirm that Shaun Fraser has signed a new contract at the club keeping him at Newlandsfield until June 2022.

Shaun signed for Pollok in the summer of 2018 and has made 60 appearances scoring 30 goals. He was this seasons top scorer with 21 goals before the season was called to a halt and Lok gaffer Murdie MacKinnon was clearly pleased to tie up a long term contract for the talented Fraser;

I am delighted that Shaun has committed his long term future to the club by extended his contract until the summer of 2022. Shaun is without doubt one of the most talented players in our league.

His ability to play on the edge with a gritty determination and combine that with breathtaking ability makes him a unique talent. Shaun has a tremendous goal scoring record also netting over 20 goals last season. On top of all that he is a brilliant lad to have around the club.

Meanwhile, our Donate a Ticket campaign is ongoing. 100% of donations go directly to the club which helps with ongoing costs as a result of loss of ticket income. Any donations, if you are able, are very welcome.